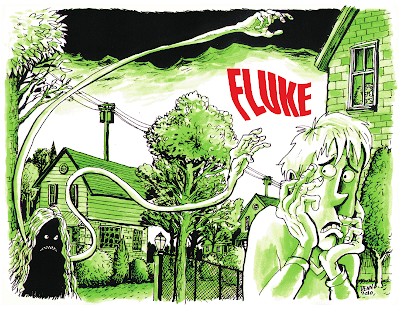 The fine folks at the independent and international comics blog Avoid The Future! have a lovely write up about this year's FLUKE Comics Anthology.

It's immediately clear that the artists had fun adding their own touch to the basic lay-out. We felt compelled to compare each page to see the differing way each contributor interpreted the characters and environment: In some panels, the male is portrayed as skinny coward, in others, a heroic victim; similarly, the depictions of the demonic female vary from powerful super-villain to grotesque monster.
Posted by Patrick Dean at 10:18 AM

Food To Eat When You're In Town